Photo by David Slater (or “Naruto”, if you’re insane and hate photographers)

A monkey and a photographer take some photos…

The story began innocently enough. Photographer David Slater was photographically documenting a group of macaques (monkeys) in the Indonesian rainforest in 2011.

As the story goes, Slater made numerous attempts to capture tight shots of the monkeys’ faces, but such images proved impossible to produce using standard photographic approaches.

Ever the astute nature photographer, however (and not unfamiliar with the intelligence and inquisitive nature of his “subjects”), he surmised that the best way to capture said images would be to allow the monkeys to essentially “play” with his camera and hope the animals’ curiosity would produce the desired result. And l and behold… it did.

Slater’s monkey “selfies” gained instant popularity and notoriety, and as is oftentimes the case with images boasting a widespread appeal, various websites began using the photos on their respective pages, blogs, news articles, feeds, etc…. without his expressed written consent and/or attribution (cue shock and awe from any professional photographer reading this).

One such site to use Slater’s images was Wikipedia, a company that Slater promptly (and understandably) requested cease and desist from further use of his photos.

Wikipedia refused, citing (and yes, I’m being dead serious here) the monkey was the actual creator of the image, and not Slater himself.

Yes, you read that correctly: the MONKEY created the image. And because the monkey “created” the image, the photo is non-copyrightable and therefore usable by essentially anyone and everyone (without proper attribution and/or compensation).

Thus, for the hundreds, if not thousands of times Slater’s monkey “selfies” have been blasted on the interwebs, he hasn’t, nor will he likely, see a dime. Why? Well, let’s call it for what it is, because it is indeed that absurd: A MONKEY OWNS THE IMAGE. Yes, a monkey.

Just wait, it gets worse

But the story doesn’t end there… far from it. In 2015, PETA stepped in and decided to sue Slater for using one of his monkey “selfies” in a book showcasing his wildlife photography.

And yes, what you’re contemplating in your brain is actually (and sadly) entirely accurate: PETA was representing the monkey, who was essentially suing Slater (yes, the monkey was suing) for any proceeds earned from the sale of said publication. The court battle has essentially rendered Slater (an already-struggling photographer) broke.

This got me a bit angry…

Now, if you’re a professional photographer like myself, at this juncture, it’s highly plausible you’re both wholly confused and simultaneously infuriated… and rightfully so. I was ready to don a fur coat made of kittens and eat baby seals in front of PETA’s headquarters.

In addition to being a photographer, however, I happen to be an animal enthusiast, so I refrained; and instead opted to use my words like the adult I am, and share what I hope will be a perspective that perhaps many siding with the monkey (I can’t even believe I had to type that out loud) might not have considered.

Or, at the very least, perhaps people will glean some better understanding of how photography actually works, and dispel the whole “button-pusher” mentality.

The primary issue at stake here…

The primary issue in this particular scenario is the semantics inherent to the word “creation.” In my professional opinion, it needs to be trashed and/or significantly revamped.

Any photographer, even the most novice shooter, knows that the creation of an image lies within the preparation and setup. Period.

Nowhere in this “creation” definition is there room for considering powering on the camera, adjusting settings (aperture, ISO, shutter speed, and perhaps a dozen or more custom and non-custom functions), staging the foreground and/or background, adjusting lighting, waiting for a specific time to utilize natural light, positioning the camera, etc.

The list is as long as the current definition is absurd.

Not to mention discounting the sheer years of pure photographic experience inherent to each and every image taken. If pressing a button defines creating an image, the problem isn’t just the frivolous lawsuit, but also the very foundation of the lawsuit itself.

This is the risk

By that logic, if I purchased paints for an artist, I own the subsequent artwork. If I write a novel and have someone else design the cover, by the current definition, he or she could conceivably lay claim to the words contained within.

Not only is the definition utterly absurd, but also downright harmful. Throngs of people already falsely assume that what photographers do for a profession is merely push a button.

This entire case essentially perpetuates that falsehood. It’s already difficult enough to make a living as a professional photographer; especially when even human subjects can sue us for damn near anything under the sun. Now we have to concern ourselves with animals doing the same?!

What would you think of this scenario?

Decades of experience and knowledge are about to combine in a brilliant moment of pure photographic perfection. I hold my breath, and as I’m about to depress the shutter… she charges.

A grizzly I hadn’t previously noticed comes bursting through the underbrush. Having no time to grab my gear, I bolt for the safety of my truck.

I barely make it to the cab and slam the door before the bear is within a paw’s reach. I narrowly escape with my life, and as I peer over to where my gear is, I see the tripod horizontal on the rocks, camera still attached. The bear must have bumped it mid-chase.

Unable to access the cab, the bear loses interest and scampers off. I return to my gear, pack everything up and waste no time loading it all and getting the hell out of Dodge.

When I return home to upload the images, however, I notice a pair of photos I don’t quite recall taking.

They’re tight shots of a grizzly’s face; the same bear that charged me (I could tell by the markings).

In smashing through my gear, the bear must have stepped on my camera as it bounced off the rocks and hit the shutter with its feet. “Ha! That’s crazy!” I think to myself, as I upload the gallery to my website.

Now, if anyone can honestly sit there, and in all sincerity and honesty tell me that bear owns those images and the photos are non-copyrightable… I will refer you to my lawyer.

Next post Getting A True Smile From Your Photography Subject 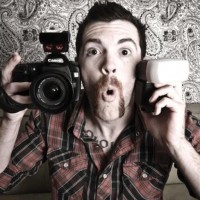 About the Author Bradley Schweit